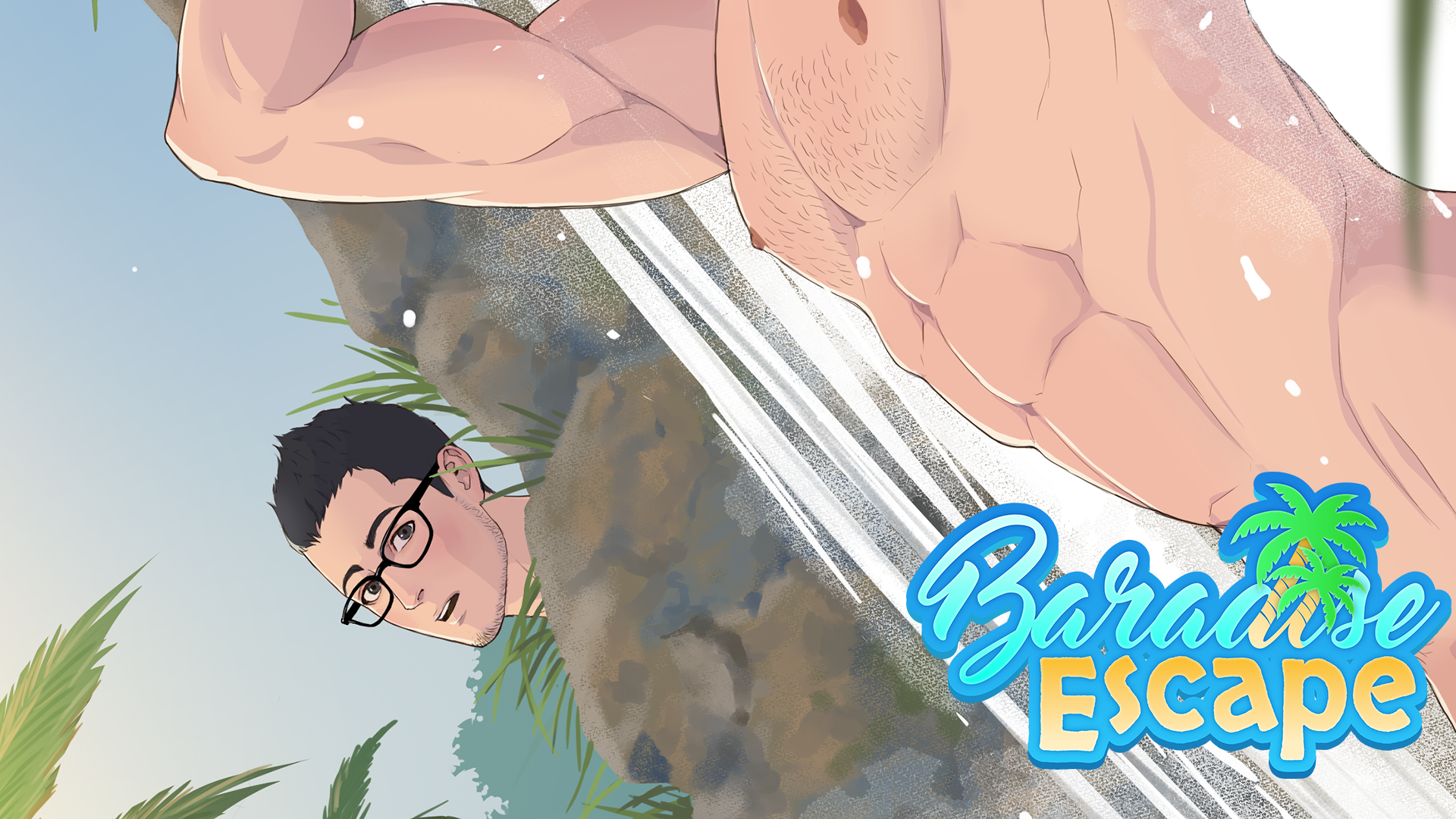 Thanks everyone for the enthusiasm and for your help in filling the survey!

Received 163 responses in public poll & around 30-40 of the patrons voted. The result so far is the following!

It’s been roughly the same result for the past few days, so this is probably the final result. I’m still opening the poll until the end of February, though, so you still have time to vote until then!

I’ve also received several other feedback which I find interesting:

For the fundraising campaign demo, I’m planning to end the demo when you’ve reached the Haluca tribe. These are the to-do-list before the demo can be released!

1) Add Lust and Hygiene to the current meter.

For the current system, I’ve only coded Hunger / Thirst / Health, so will need to add those two meters in. It shouldn’t be too hard to add, though.

I initially intended to make it an action battle system (so the battle is done on the map itself), but it makes the game lag too much, and I’ve decided to make it ordinary turn-based combat.

Some notable features for the battle system: 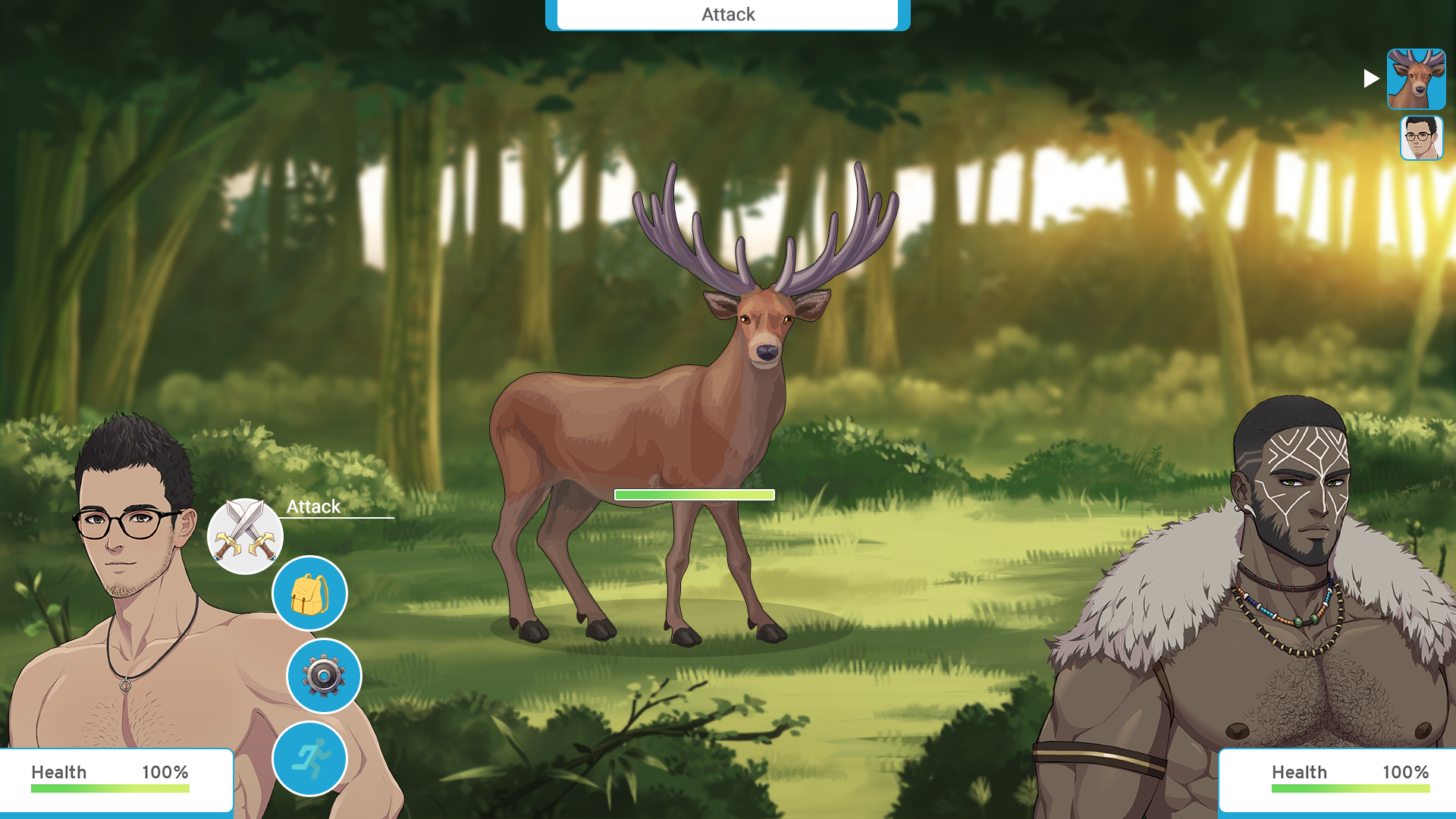 Simple Quick Time Event (QTE) where you click the screen when the fish bar is in the blue area. I’ve coded the exact same fishing system for Banana Ranch and I’ll reuse it (just gotta change the graphic, so will be quick) 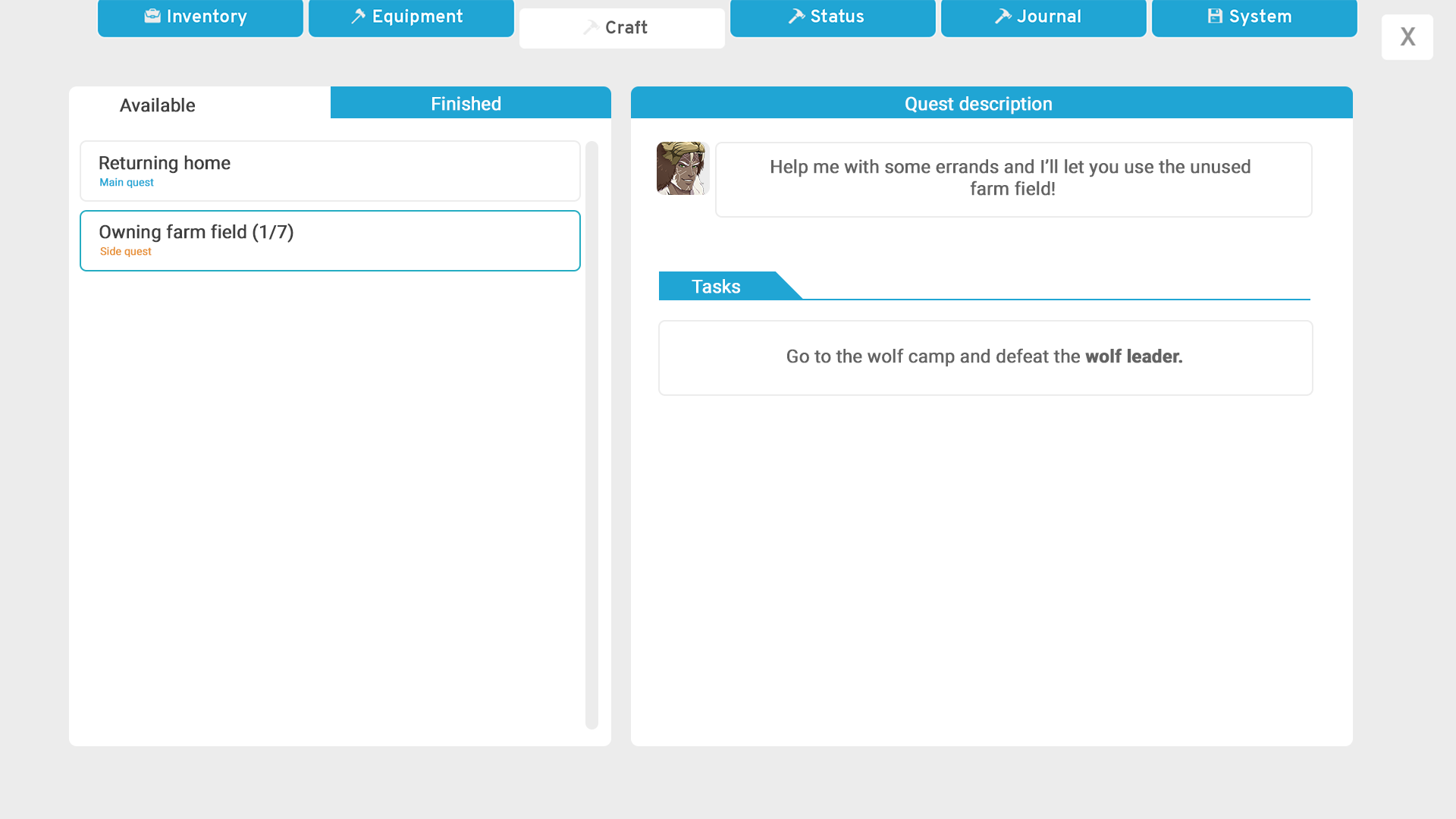 I plan to make it so you can collect skill orb throughout the island, and allocate it to your skill as needed.

Throughout the island, there will be teleportation portals that you can activate. After activated, you’ll be able to teleport to that portal anytime you want to enable quicker travel. 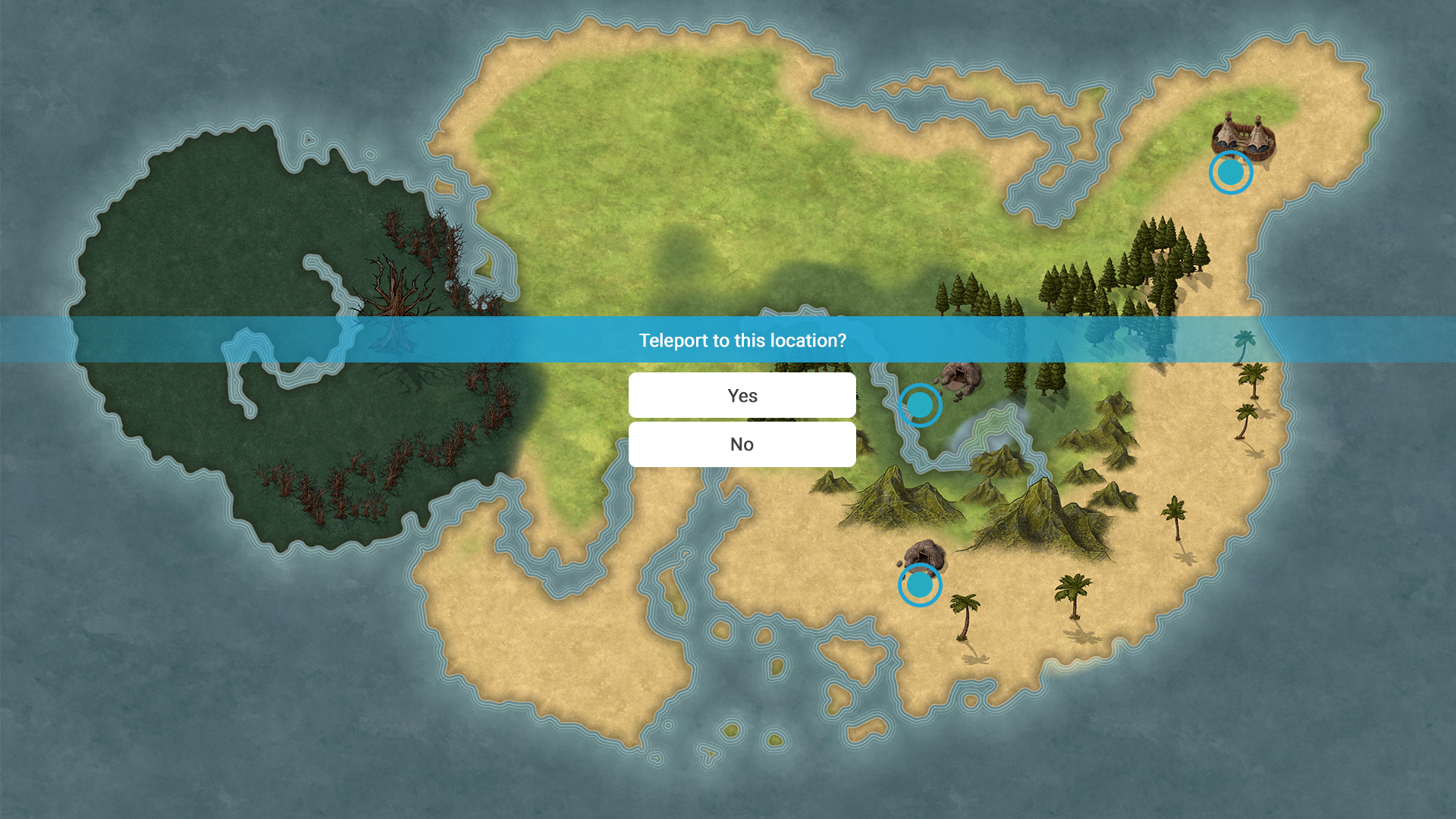 Mockup. Island map is in-progress, so it looks a bit empty right now. There will also be an underwater map for the underwater area.

Have drawn Alan, Mads, Citali, and Ragnar. Still needs to draw Lex and other Haluca tribe NPCs, Alan’s sprite for when he is fishing, and the wild animals sprites (for demo: deer, bear, blood sucking bats that appear during the night) 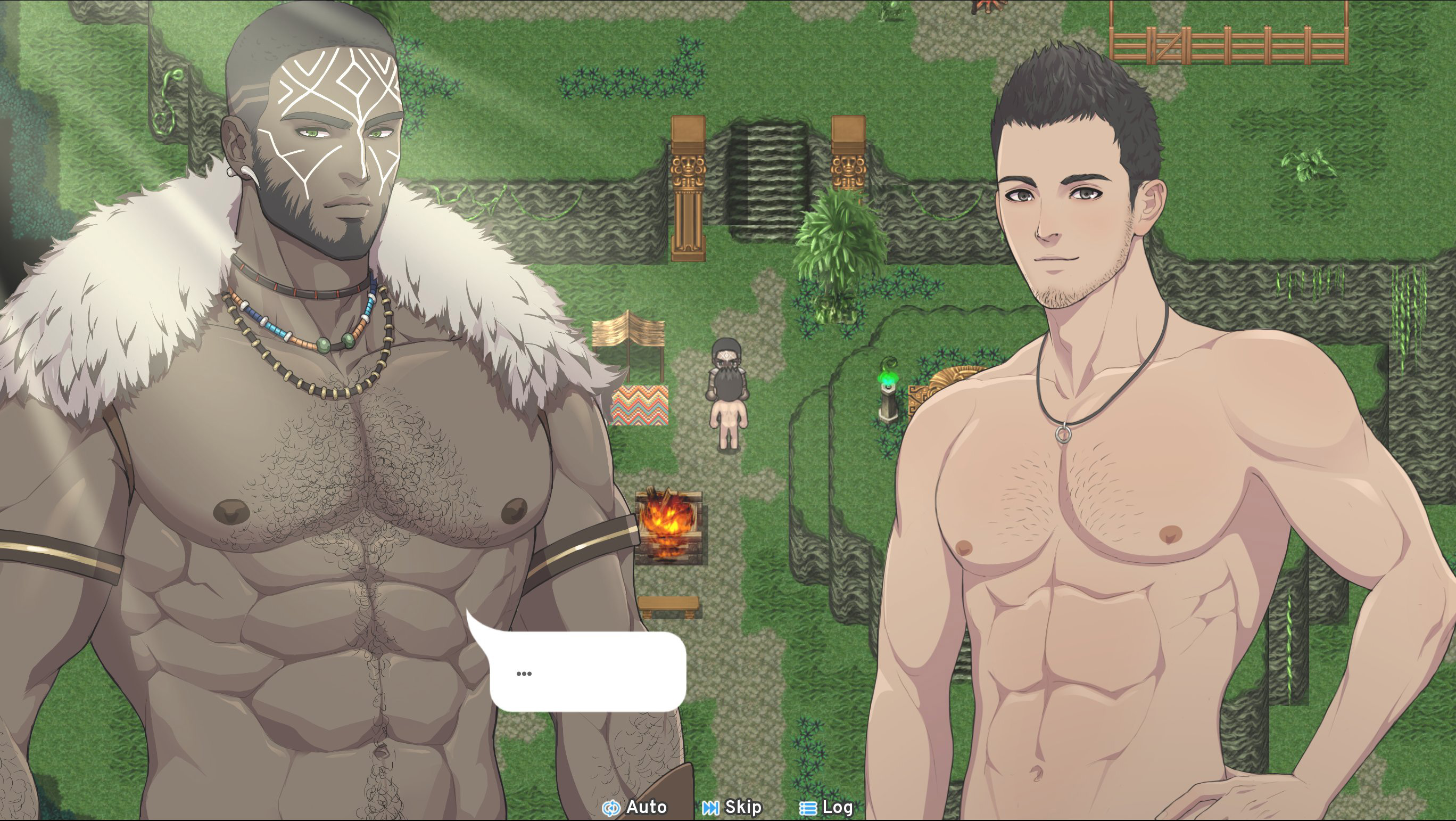 9) Add some more maps & obstacles in-between the beach where the game begins and Haluca tribe.

…And that should be it! More might be added as necessary, but this is the rough breakdown. Fingers crossed I can finish all above to-do-list before my self-imposed deadline 😅

What you can do to help!

For now, I plan to release the demo & begin the fundraising campaign on 17th March!

Since the campaign can only be run through itch.io (aka this site) because Kickstarter isn't supported by my country, the visibility will definitely be limited. Due to that, we'll have to rely A LOT on word of mouth to spread words about this game. If you want Baradise Escape to succeed and for all the stretch goals to be achieved, please help us spread words about this game as much as you can! You're allowed to repost any of the images on this page if you need to!

Suggestion for more promotional channels to reach bigger audience is also really appreciated! (you can contact me directly via e-mail meyaoigames@gmail.com if you're hesitant to comment :p). Anyway, any kind of help is welcomed. Let's all do our best for this game to succeed! 🥰

Fingers crossed his route can be achieved! Since the campaign is done through itch.io, I can do an extended period of funding (for Banana Ranch, it was extended to 6 months) which hopefully allows more time for the stretch goals to be achieved!

This game seems like an ambitious project with all that you have planned, but I absolutely have faith that you'll succeed because of the quality so far. It really does look promising. I certainly couldn't create a game like this myself, so I'm grateful that you're able to make it for us.

Most of the gameplay elements are things that I've implemented for Banana Ranch, so the additional challenge here is in making nice RPG maps to explore and survival aspects! It's definitely an ambitious project, but so is my other games. I want to push myself to break my own limits & continuously improve with each game 😊

Anyway, production time is definitely around 2 years until actual completion (judging by how long it usually takes for me to finish my games...). Though, I update almost daily on Twitter (twitter.com/meyaoigames) with game updates so hopefully that can ease up the anxiety for the long wait. Making games is just so time-consuming no matter how long I've done this for 😅

Android version will be released when the game is finished!

Aye, planning for one with cute curly hair! 😄

No Ragnar route on the demo?

You can see and talk to him, but no romance scene with him yet.

But will there be in the future in the public update?