I've been busy with my other project, Banana Ranch, so there hasn't been much progress coding / writing-wise (should be less busy once I get Finn route released and in next waiting phase for the next love interest CGs to be finished). However! Our artist has been working hard to finish up the rest of CGs! 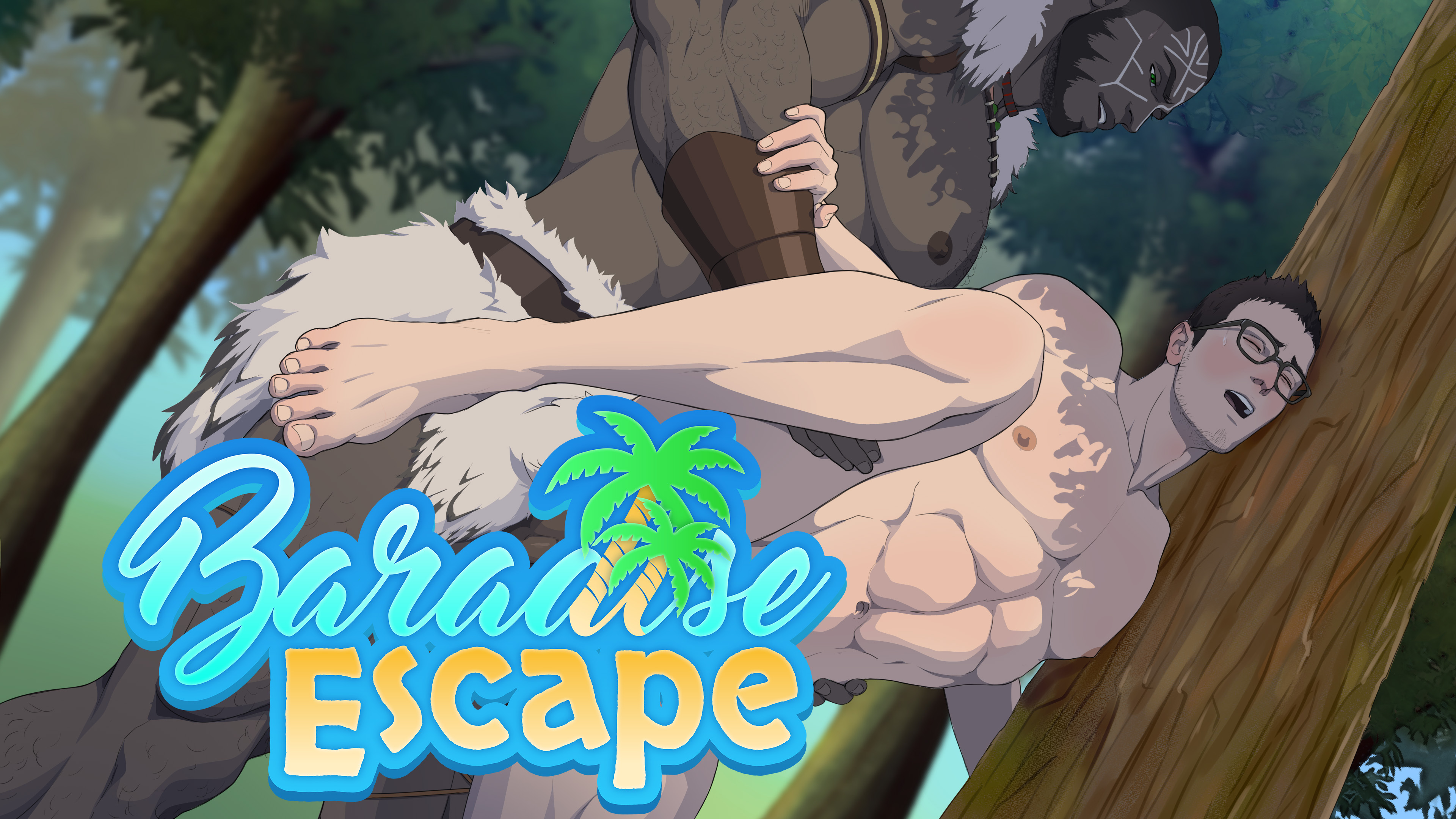 Here's one of them! Looking very hawt, isn't it? (Conveniently placed logo for censorship xD)

Next up will be Syris, the merman =) I've decided to give Syris both merman sex & human sex scenes... because I can! =P

I've been gathering feedback for the alpha demo and while most players say the game isn't that laggy, I think most would agree that the game framerate is a bit... low. It's mainly due to the fact that I'm using Renpy to make Baradise Escape so far.

I've been tinkering with the idea of re-making the game demo in Godot, an open source engine that is much better suited for this kind of game. On top of the better performance, it should allow for action-based battle (better suited for survival game like this), more dynamic AI (letting the other characters roam the island to collect resources when they're not in party), better lighting system (actual lighting system instead of just using image layering), simple procedural generation (make it so resources aren't spawned at the exact same place), etc etc.

HOWEVER, the main drawback for this plan is: I'm much less proficient in Godot than Renpy, so it's definitely gonna take me more time to make the game because I'm gonna need to re-learn the workflow. I managed to code the inventory system in Godot after a week-ish of learning, so I should be able to manage to... but in general, it's definitely gonna take me more time than using Renpy since I'm already very used to the workflow (already made 2 commercial games with Renpy so far...)

Currently, I'm still undecided between the two, but leaning towards porting the game to Godot considering the long term benefits it would bring.  Anyway, I'll wait to decide until I'm done with Banana Ranch's Finn's route!

That's it for this mini update (it really is just an excuse to flaunt the sexy Ragnar pic xD). Until next time!

Nice to hear that more people are willing to try out Godot. To be honest I was quite critical of it at first, but after working with it for close to two years I've taken quite a liking to the engine.

Seeing you try to give Godot a chance even inspired me to write a tutorial on how to build an inventory system in the engine. I hope Godot doesn't disappoint and that it enables you to fulfill your vision for your games.

Oh, I'm pretty sure Godot has everything I need. The only question is whether I have the ability to use the engine well or not xD

Managed to get the basic movement, the health survival stats & inventory done, but  still groping around for the simple procedural generation (to make resources auto-spawn around area. but preventing them from overlapping with each other).

I'm not really an expert on procedural generation, but if your entire level is procedurally generated you could give your resources a radius and before spawning a new resource you create a new random position until the newly generated resource's radius and the old resources' radiuses don't overlap.

If you have fixed levels and only allow resources to spawn in certain areas, I'd recommend using tilemaps where each filled tile signifies a position where a resource can be placed. When generating the new resources you first check where it can be placed and if the tile is already occupied (a dictionary with vec2s might be useful to store the data here). If there is a valid tile where the resource can spawn you add the resource at the given position into the level and the runtime data.

I'm trying to use the spawn on certain tiles one (using tilemap). Followed a guide on Youtube, which I think is similar to your idea (They record the occupied tile position to a dict and if there is already that tile in the dict, don't let the new resource spawn there), which worked nicely, but I had problem modifying it to work with larger-than-one-tile resources (for example, a tree might have width of 3 tiles and height of 2 tiles).

The style of the game reminds more of RPG Maker ones. Even though I usually hate them (as they all look too similar), but if you use only your own props and add unique mechanics, if should look nice enough. So, why trying to make something that looks very similar to RPGMaker-like game in other engines?)

RPG Maker is incredibly limited though regarding UI and such. I have played survival games made in RPG Maker and the UI for crafting is usually very inconvenient to use. RPG Maker is probably best if you want to use it to make JRPG ala Dragon Quest, but at the end, it is still very hard to customize the UI to look how you want. Customizing even dialog boxes is so painful I just don't want to go through with that engine :x

You also need to heavily rely on external plugins to accomplish most things which I don't really like as you can't control them (I also tried RPG Maker MV once and game performance wasn't that good either. Music only loads after like 3-5 seconds of delay. I don't know whether that has improved or not now)