As the title says, Banana Ranch's upcoming Indiegogo campaign is unfortunately going to be cancelled, however, the project lives ON! 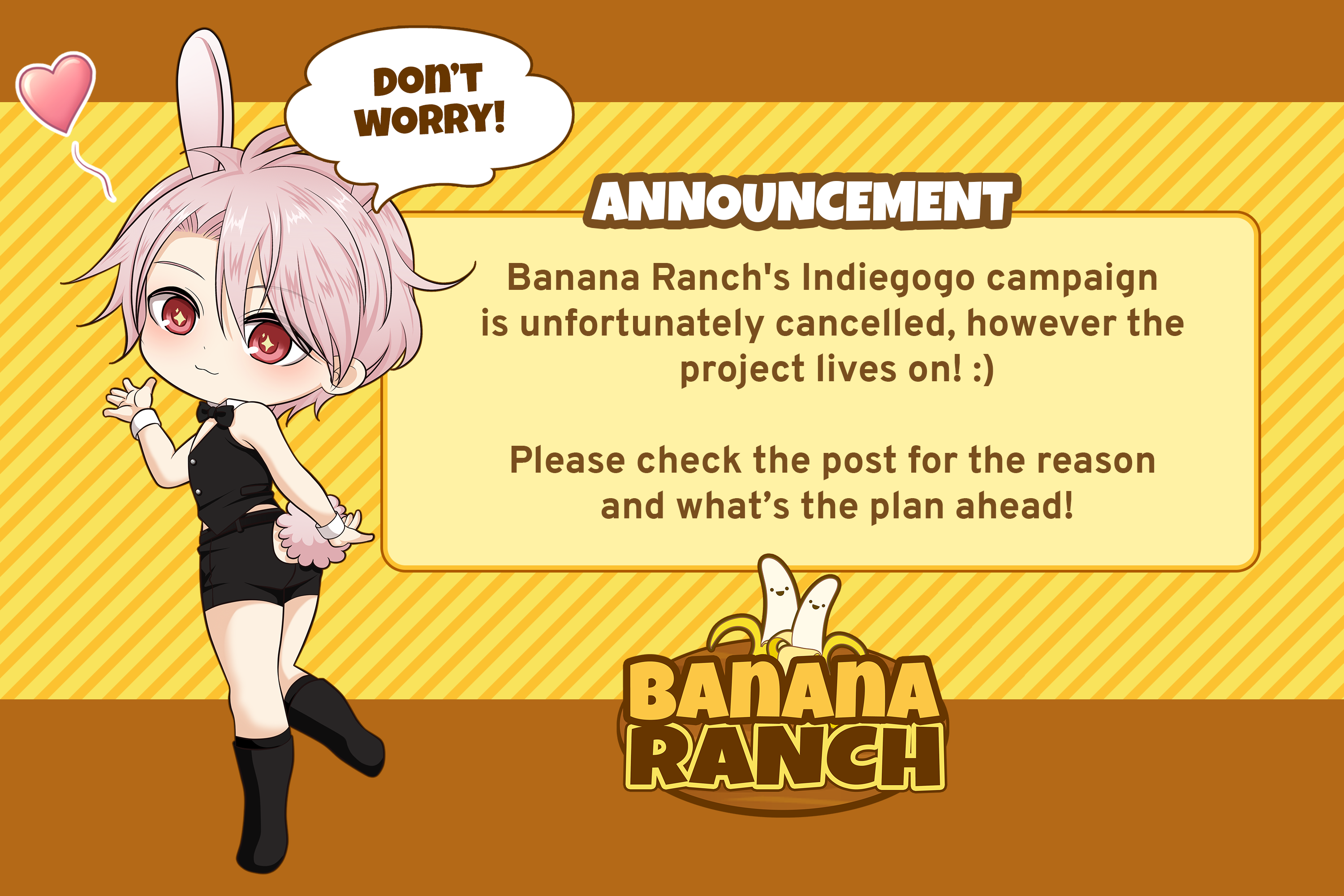 The reason for this cancellation is because Indiegogo has changed payment processor to Stripe, and thus no longer supports my country. That wasn't the case a year ago, so I assumed my country was still supported. Unfortunately,  that wasn't the case. I realized it too late and ended up already announcing this upcoming everywhere & get people's hopes up for nothing, sorry about that :(

Due to the same country restriction, I also won't be able to launch the game on Kickstarter. For Seiyuu Danshi's Kickstarter, I used to ask a friend living in US to help, but that ends up getting her a bunch of unwanted trouble that I don't want to repeat again.

No, the game won't be canceled. The game has taken shape nicely, and I don't plan on giving up on it. What's next then? Well, the only platform that still supports my country & accepts adult games (+ reliable enough of a site) is probably Patreon. Because of that, I've decided to move the campaign for Banana Ranch production to my Patreon!

Patreon is more commonly known as a crowdfunding site to support content creators in periodic / monthly basis. I'm currently using it to fund general living expenses (to allow me to work on games full-time) as well as Seiyuu Danshi After Stories.

No, you won't have to pay monthly to back the game! The rewards will be based on the accumulated pledge charged during the campaign period (from September 2019 onwards). As long as you've met the accumulated pledge amount for the reward tier that you want, you will get the reward even if you stop being a patron! On the other hand, monthly payment can be beneficial if you want to pledge for high tier rewards but don't have enough money right now. For example, if you want to pledge for $60 tier, but can't pay $60 in the first month, you can slowly pay $20 per month and get $60 tier reward after 3 months.

⭐️ You can pick whichever method suits you & your financial condition best! ⭐️

Patreon's system is that it charges payment upfront. It means, as soon as you press "Become a patron" you will be charged immediately, which is different from Kickstarter who only charges backers when the campaign goal is achieved. This is understandable, because Patreon isn't really made for project crowdfunding. Because of this restriction, Banana Ranch's campaign won't have a campaign goal. That means, regardless of whether the campaign reaches certain amount or not, I'll still finish the game (although it'll be much simpler than the one advertised on itch.io).

Why should you pledge if there's no goal to achieve, then? Well, instead of "campaign goal", there's "stretch goal"! Most features won't be unlocked if stretch goals aren't achieved & most guys won't be dateable as well. Basically, stretch goals are important  & unlocking them will definitely make the game much better. If you're interested in supporting Banana Ranch, then please do pledge during the campaign period! As a bonus, you can also get cheaper price for the game & obtain physical merchandises that might not be available to public. Also, if you're the type that wants to become even more involved in the game, you can also become in-game character & design stuff that will show up in-game.

As for how long the campaign period is, I still haven't decided on it yet. I originally intended to have the campaign last 60 days, but that was on Indiegogo. Since it's on Patreon, it's probably going to take significantly more time than Kickstarter / Indiegogo to collect funds (there's no countdown timer, and campaign's total accumulated value needs to be updated manually :/). Due to that, the campaign period might last longer than 2 months. I'm going to make an announcement post when the campaign period ends.

Stretch goals list will be listed on Patreon page from 29th September onwards (more details will be explained later). Stretch goals will be based on the accumulated pledge earned during campaign period!

As an illustration, consider the following situation:

If, for example, the stretch goals for the campaign is as below:

In this situation, per October 2019, stretch goal 1 is achieved, and love interest A will become romance-able in-game! Yay!

If, on November 2019, total pledge earned is $5,000, then total accumulated pledge is now $25,000. This means that stretch goal 2 is also achieved, and love interest B will also become romance-able in-game! Woo-hoo!

Well, that's fine. I'm posting this just to let you guys know the change of plans since I have stupidly announced the upcoming campaign everywhere. I seriously didn't know, I mean... I was even already designing the Indiegogo page, which has all become useless now T_T

Anyway, that's it for this post. I hope this gives you guys a clear understanding of what I plan to do afterwards, and how the upcoming Patreon campaign will work. More info will be posted later. For now, I'm going to concentrate on finishing the demo! (didn't work for these past two days because stressing out the Indiegogo campaign's matter :/)

Will Banana Ranch be on a patreon page separate from the one Seiyuu Danshi is on?

It's planned to be on the same Patreon page. So, it's gonna be monthly reward (after stories episodes) + accumulated reward at the end of campaign period.

do you know what the patreon tiers will be? i wanna support the project but i’m lowkey broke lmao.

That is too bad but I still plan to support you however I little I can! \^_^/

O well these things happen. You have a link?

The campaign hasn't technically started, but it will be on patreon.com/meyaoigames =)

Wow that sucks, damn Kickstarter/Indigogo, not having support your country. (I will def fund on Patreon if I have money and maybe I'll pledge a smaller amount 2x rather than 1 whole big one) Good luck with Patreon

That's so lousy and unfortunate. I really frickin love your games and I will definitely be purchasing this one.

I'll be there wherever you do it! I am unbelievably excited about this. :D

That said, I hope you eventually set up something where people can make direct payments, even if it's just buy me a kofi or something - I've heard a lot of people are leery about setting up monthly payments that they have to remember to cancel, and I want you to get as much money as possible. ^_^

For now, I don't have any plan to set up another page (to prevent databasing complications 😵). For people who are averse to it because of the monthly thing, they can probably buy the game directly once it's finished instead.

Don't worry, I'm already convinced! I just heard that from another friend who switched her donations to Patreon. :)

I guess you could also set it up as a pre-order so people could buy the game early and give you the money you need for development. After your last game, I feel like you have a lot of good will built up!

Really, either way, I know you'll be successful - I just don't know how I'm going to be able to handle waiting until it's out. ^_^

I might open pre-order later on, but that will be when the game is closer to completion! ^^

The game is still in very early phase of progress right now.

Howl, can you not trample on our sensitive emotions please? It's still raw uwu'

Anyway~ Howl aside, I'm glad you didn't cancel the campaign entirely! Doing it through Patreon sounds nice as well, though I understand that it's not ideal from your perspective. We'll make it work! By the way, out of curiosity, will we still have to pay for the game even if we pledge $100 or more for the campaign? No free copy? I seem to remember devs offering free copies for high pledges. It's fine either way. Just wanna make sure ^w^

You'll get free copy the same way as usual Kickstarter works! In above example, both backer A and B would qualify for $100 tier (which usually contains: free copy of game, artbook, and even physical copy!). More details about rewards tier will be posted on the d-day, but yeah, you will definitely get rewards like usual Kickstarter goes =) (I'll edit the post to add more info about it)